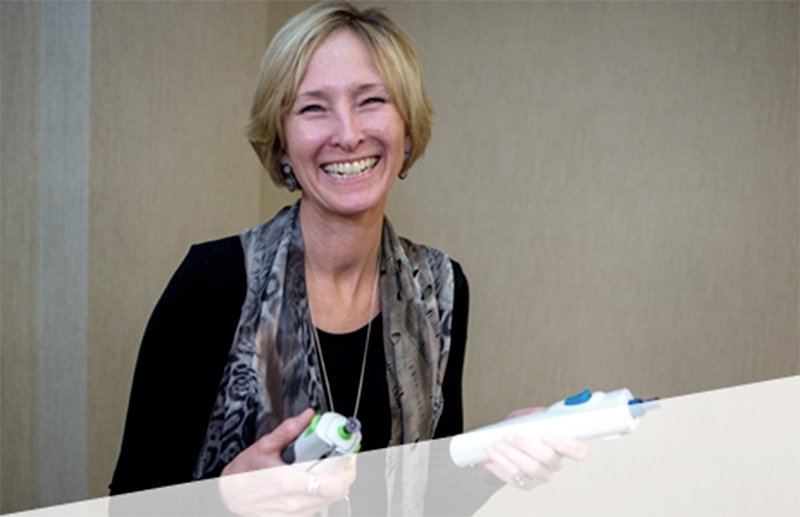 When she’s not finding ways to rid the world of polio, the Zika virus or cancer, Heather Potters gives back to local companies and promotes Colorado Companies to Watch.

PharmaJet — the Golden-based company she co-founded with her mother, Kathy Callender — won a Colorado Companies to Watch Award in 2011.

Potters called the CCTW honor a special moment for her and her company.

“It was a rewarding recognition,” she said.

Potters is a firm believer in giving back. She’s been there for CCTW when needs arise. Over the years, she has pitched in on a number of activities and events and has served as a judge to determine future CCTW winners.

“There is never enough time, but as I always say, I will try to volunteer,” she said.

“If someone  asks for help, and I see it as a fit for what I can contribute, then I am the first to volunteer.”

In addition to volunteering as a CCTW judge, Potters has helped out during CCTW gatherings and participated in alumni committee matters and fundraising.

“I do this because it has helped reinforce having a successful life,” she said of the volunteer effort. “Showing up is 80 percent of everything. The rest is intelligence, hard work and polish. … Showing up has made me successful, whether it involves showing up for a presentation, an event, or if someone needs help.”

Potters’ company shows up big time in the battle to fight global disease. PharmaJet  has created a needle‐free injection technology that delivers drugs and vaccines into the skin, not the muscle. This technology uses pressure to create a fine stream of liquid that penetrates the skin. The system eliminates needles, the fear of needles, and the potential contamination that can occur when needles are used during immunization.

For the Global Polio Eradication Initiative, the PharmaJet system has proven that through intradermal injection, using 60 percent less vaccine produces a superior immune response to a full dose of vaccine, by moving from injecting into the muscle to the skin.  It also gathers 20% more out of the vials and is 2-3x faster compared to needles. That level of efficiency leads to reduced waste and lower costs.  PharmaJet’s collaboration partners for this and other initiatives include the Bill & Melinda Gates Foundation, the Center for Disease Control, and The World Health Organization.

PharmaJet’s technology has been used in a variety of venues, from commercial vaccine clinics to field settings for mass immunizations in developing countries, plus more than 60 studies for vaccine developments, touching more than 20 countries.  With its global commercial roll-out in process, supported by a distribution partner with coverage in more than 120 countries, in a 2.5 billion annual immunization market, the company’s future potential seems limitless.

“We are preparing for public listing and that listing would be oriented toward Asia,” Potters said. “I want to see PharmaJet available everywhere. I want to make it a standard of care for immunization.

Potters has a great history of travel, investment and global assistance.

Prior to her work with PharmaJet, Potters worked as a private fund equity manager covering central and eastern European countries, and lived 19 years in Poland.

She came to Warsaw not long after the fall of the Berlin Wall, after completing her MBA.  Her investment work in Poland and Eastern Europe involved managing three closed end private equity funds, covering Central and Eastern Europe.  She’s managed individual investments and financial investor consortiums, that ranged from  ranging from $1 million to an excess of $100 million.

Potters has also been an angel investor in health-related companies. She is currently involved with three brain health companies:  Cerescan, a unique brain imaging and diagnosis technology company; Curemark, a fellow Spring Board